For DVD class we have to find 3 DVD menus that we think are well done and answer the following questions.

This is my homework submission.


1. Sweeney Todd - I like that the menus are integrated user interfaces with graphics made specially for them. There is no looping clip in the background. I hate it when there is dialogue in the menu. The transitions are quick. The framing of clips that serve as backdrops for the menus is nice.

The transitions are very quick, a nice change over many dvds with 30 second clips between each menu.

The language background could be a little more interesting.

2. Waltz with Bashir - The main title screen is cool with the looping shots from the movie. Again, its nice there isn't any dialogue.

The backgrounds of all of the other menu selections other than the main menu could have been more interesting. They could have involved more animation there.

3. Monty Python and the Holy Grail - The looping animation behind the main menu is pretty long and it takes a really really long time to see the entire thing. "The Hard of Hearing."

Taking the opportunity to tell jokes in the dvd menu that isn't in the actual movie.

For this Summer's New Media project I'll be once again focusing on look development in computer animated graphics. Instead of experimenting with several looks as I did last quarter I'll be focusing on a single look for a short animation. The short will be a character driven animation with a bit of story. What I will be primarily focusing on is seamlessly integrating 2d backdrops with 3d animated scenes. For this I will be using locked off camera angles so that I can use painted scenes with the 3d elements. Additionally, if the story calls for it, I will use 3d projection techniques in Nuke to create parallax effects with the 2d painted backdrops.

Inspiration for this piece has come from a variety of places. A short animation created by students two years ago demonstrates a way of mixing 2d and 3d animation for a very attractive piece. In it they used painted backdrops and a cel shader similar to the one I used last term as my third look to get a painterly feel that is reminiscent of an older Disney or Miyazaki animation. 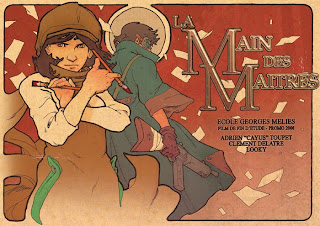 These Gobelins shorts are an inspiration as well for their detailed painterly look.

A short animation based on a children's book by Shaun Tan. Hints at a little bit of the painterly approach.

A music video of a Gorillaz song. Animation by Passion Pictures of Australia. Some nice matte paints for the backgrounds and one shot with the character inside the windmill as pieces are falling are especially notable.

Past projects I have worked on that I am building upon are a dynamics test and Flight, an animation from last quarter.

Bottle Toss was a quick dynamics test I completed at the end of last quarter. I didn't want to construct and render an entire outdoor scene so I kept the camera still and painted over the unrendered parts and added detail to others. Here are the layers that were composited together and the final piece. There are some issues with the perspective and I unfortunately didn't get to do a shadow pass which would have integrated the pieces a little better. 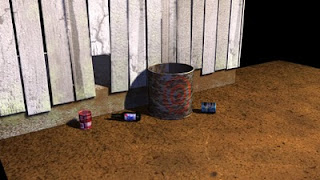 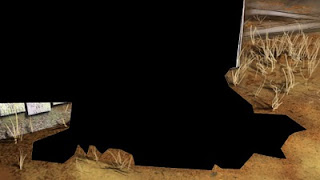 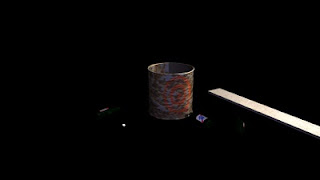 A rough cut of my animation final for last term. There are obvious rendering and animation issues with this piece as well but what I wanted to point out was the painterly effect I was trying to convey with the textures and background. While I am planning on polishing this piece I had hoped it would have more painted backdrops as well. Something I am incorporating into this quarter's short animation.

The story for this summer's animation is in the rough previs stage. I have the beginnings of storyboards and this t-pose for a main character. The old turtle creature is a wood carver and the animation opens with him sitting at his workbench carving a miniature unicorn or some other mythical creature. He finishes and turns away from his work. There is a sound and he turns back to his work and the statue is gone. Sounds keep drawing his attention around the workshop as if he is not alone. He finally corners the noise behind some objects (maybe a curtain) When he uncovers the source of the noise it turns out that it is the carving as a full size creature of light. As he looks at it in awe he reaches out to touch it. As his fingers make contact with the glowing essence of the creature it dissolves back into the miniature wood carved toy. 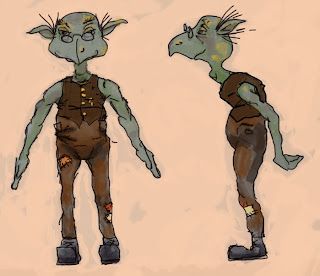 It is important to note that my focus in this class is look development, art direction, and directing. I may combine new media projects with Dan for the main visual effect and potentially have an animator for the bulk of the character animation.
Posted by Nate Shaw at 11:54 AM No comments:

Now that the Spring term has ended I finally got some time to relax a bit. (finally moved into my apartment that I technically moved into weeks ago) Last week I got to completely get away from computers and spend a couple of days in northern PA at a farm owned by one of my friend's family. I had time to do some drawings. The first one is of Jessie (farm hostess and birthday girl) and the second is Dan Bode. 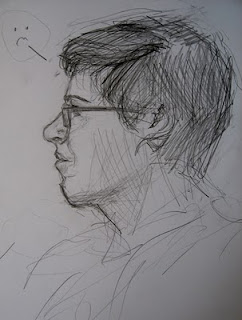 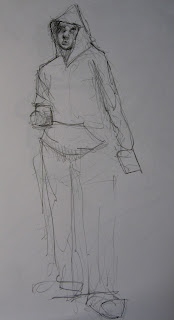 For this quarter’s new media project I focused on look development and style in 3D graphics. The class gave me an opportunity to explore look development in computer graphics and experiment with processes I don’t usually get to use. The end result of the project was a scene modeled and textured in Maya with one animated shot and two still images. In the first step of the project, I outlined three contrasting styles based on reference images of paintings and renderings created by other artists. Next I set up the constants for the projects. These were the elements of the project that would remain the same between looks. The constants included all of the modeling and camera angles. The constants provided a way to evaluate each image as a set and provided a clear link between the images.

The goal of the first look was to base the image on 18th century Dutch landscape paintings like those painted by Rembrandt. The imagery, while not photorealistic, was a stylized version of reality. I used a limited palette and pushed the colors into an orange and blue range very similar to the way a painter would. Technically the process was a fairly traditional way of rendering. I used texture maps with painted photo textures and procedural shaders. To emphasize the painterly reference I used painted backgrounds. 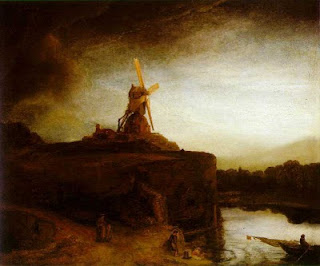 Images from CGSociety.org - artist named in the lower part of the image 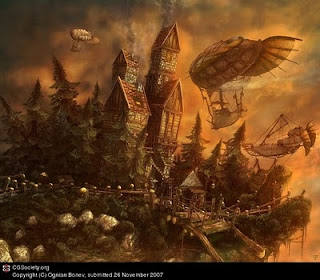 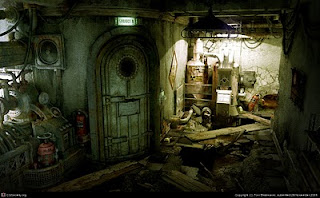 Maya renders with no background or compositing effects. 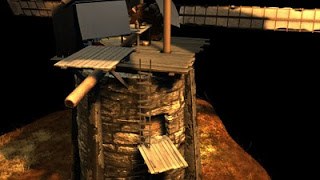 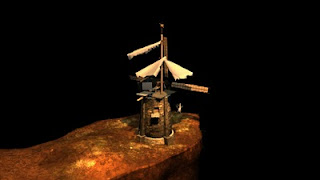 Below is a render with no background that I took into photoshop and painted over it. This served as a target to shoot for in the compositing stage. 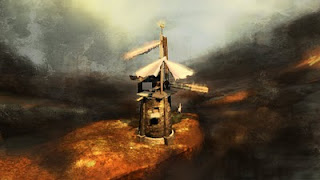 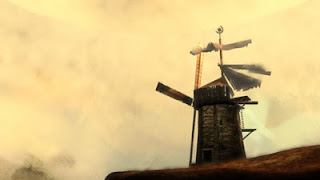 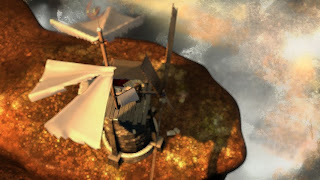 The second look referenced ink wash drawings and etchings. For this set of images I wanted to stylistically distance it from the first set as much as possible but still be faithful to the model. I wanted to achieve hard lines in the outline and interior objects with an ink washed brushed on effect for the shadow shapes. I spent a great deal of time researching an outline shader but was never able to write my own. The simplest method to get a line drawn effect in Maya without using paintFX is Mental Ray’s contour shader. For the shadows, I wanted broad brush strokes to follow the contours of the surface of the model. The brush strokes were a texture map applied to a surface shader that was not affected by light. The next pass was a shadow pass that was a hard lined black and white rendering. I used the shadow pass as an alpha channel for the brush strokes. They would only appear where there was a shadow shape. Using Nuke, I composited together the shadow shapes with the outline render on top of a static image of a canvas. The final result was a drawing moving on a still canvas.

A Rembrandt etching used as reference 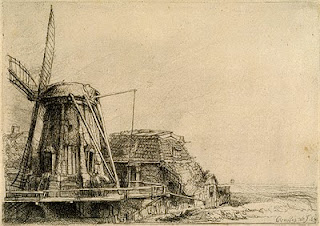 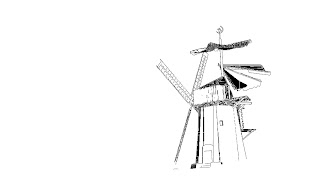 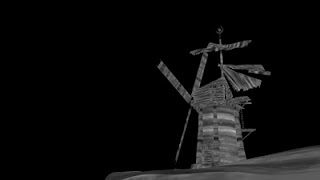 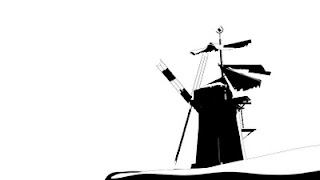 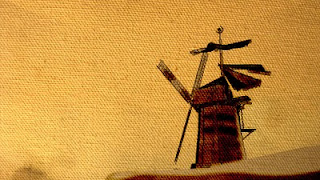 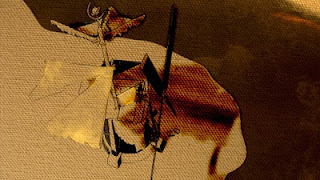 For the final look I wanted to make something that was in between the last two looks. I chose a cell shaded look because it was colorful like my first rendering but was flat like the second look as opposed to volumetric. Additionally cell rendering has a long history in animation that is often overlooked as a rendering style that I was interested in studying. The process of setting up the rendering process was very similar to the previous look. I started with an outline pass. Next I rendered out a texture pass with a surface shader. The surface shader received light equally and consisted of simplified color image maps in cell shaded style. Another way of doing the color could have been to apply ramp shaders but I preferred image maps because of the greater control and specificity I could achieve. Finally for the shadows I used the same shader as I did for the last look but this time I used it as semi-transparent bluish tinted shadows rather than a mask. The final result was a successful cell shaded image. 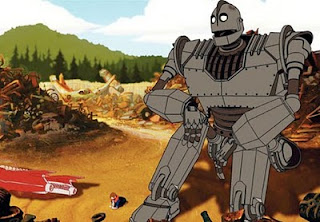 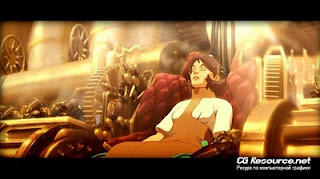 The render process was very similar to the one above, in fact i reused some of the renders so I will not show the process images a second time. The only difference was the color layer: 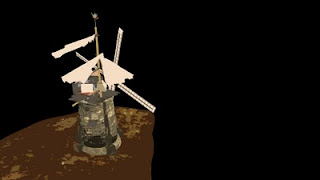 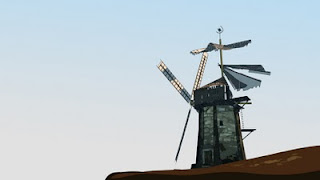 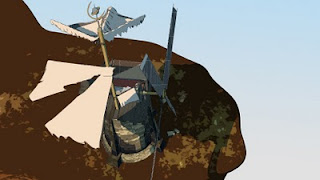 This project was successful in giving me an insight into creating two specific non-photorealistic rendering styles. I feel very comfortable with Mental Ray’s contour shader and the project has given me ideas for future styles that I want to work on. An unintended and unexpected result was greater understanding of compositing fundamentals and working in Nuke. Being forced to solve alpha problems for the second look taught me about how images should be layered when compositing. Out of the three styles, my preference in animation is still the first. As a painter as well as a cg artist I am drawn to the stylized realism that I achieved in the first style but I am still interested in experimenting with new looks and styles.
Posted by Nate Shaw at 1:46 PM No comments: 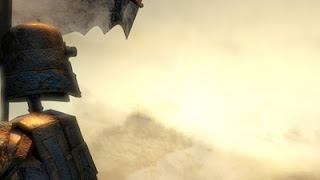 If only I had one more week for this project until the crit on Thursday... :( so much to do not enough time.

quick still from the robot final
Posted by Nate Shaw at 8:52 PM No comments: