I like to use mythology for inspiration when I begin thinking of a story. It gives me an idea and story elements to build from. For my combined Advanced CG and Massive project, I decided to go with the story of Pandora’s box. According to the myth, Pandora is given a jar and then told not to open it. The jar contained all the evils of the world and when she opened it they all escaped and all that was left in the jar was hope. I am adapting that basic story to fit my own needs by changing Pandora into a male anamorphic chipmunk creature and a jar into an ornate box. I have no thematic reason for changing the character from the original story beyond that I will be able to make a cuter more sympathetic chipmunk in less time than I would be able to make a human woman. 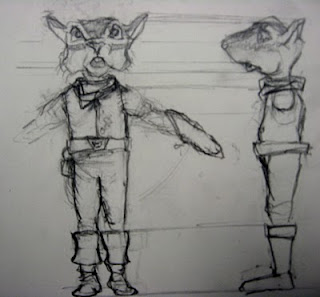 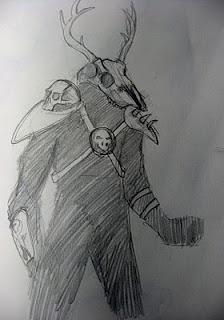 The “evils of the world” will be represented by shadowy figures wearing various skeletal armor. When the box is opened, tendrils of smoke will burst out of the opening. Each of these tendrils will form a column that when they touch down to the ground one of the Evils will emerge. The actual body of the Evils will be geometry rendered out with a constant black shader applied. In Nuke I will blur and use various noise or 2d smoke effects for an alpha of the character pass. Ideally the bodies would be volumes but the simulation time and storage would be unreasonable for the scope of the project. On top of the bodies of the Evils will be various parts of armor or skeletal objects including skulls for heads. These objects will not be blurred or shadowy. I will use Massive for the crowd shot of the Evils closing in on the Hero and to randomize the skeletal parts that they wear. There will be one main Evil that I will hand animate. For the smoke tendrils/columns I will use Houdini volumes emitted by particles following a curve. For reference I found almost the exact effect I am looking for in the Harry Potter trailer. 1:50 at this LINK.

In all there would be 4 distinct effects.
1. Smoke billowing from the box.
2. Tendrils following a curve.
3. Smoke on the impact of the tendrils.
4. The Evils dissolving into particles. 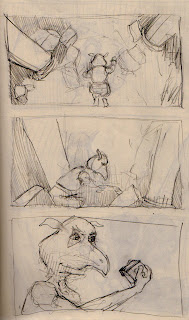 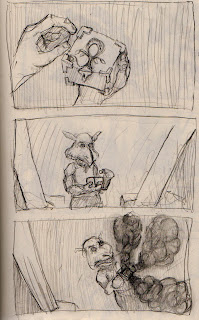 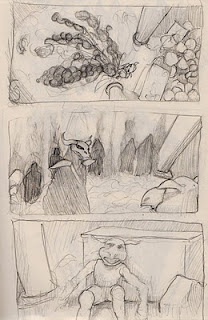 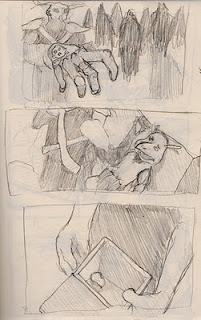 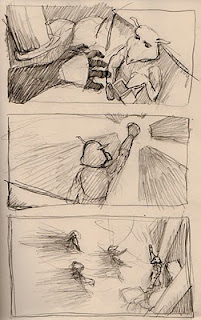 Scale is the main problem with this project. Each individual element is not difficult but there is a lot to handle. There are 4 main effects. I have done simple volumes tests in Houdini and I think the tendrils and smoke will be fairly simple to set up. The dissolving people should also be easy. The difficulty will lie in integrating these elements with the characters in massive and getting them to render properly. The second problem is character animation and creation. My storyboards and previs feature the Carver from an earlier project of mine not the character I described. I do not think that the Carver fits the story, he is an older character, not one that would be searching around ruins. If I decide to go with a new character that could potentially add a lot of time to production. The solution I have to that problem is to enlist outside help for the rigging of both characters. Modeling and texturing is added work but both are jobs that I do quickly, efficiently, and with pleasure. If I can not find someone to rig the characters I will switch back to the Carver and the story will take the hit. Overall scale is the last problem, I am not sure I can finish the entire piece by the end of the 11 weeks. Once I have a better idea about how I will handle the aforementioned problems I may decide to cut it down to a trailer type of animation. Right now I feel the story and character need more development at the beginning of the animation to get the viewers to care about the character.
Posted by Nate Shaw at 12:48 PM