Judging by my post frequency lately, it looks like I haven't been doing anything lately. Its not true, I swear! 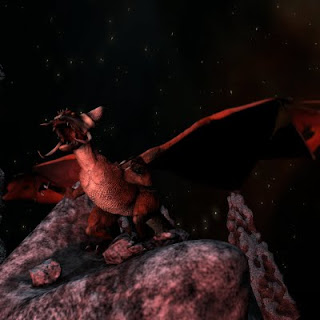 One of the projects I just finished up on was "Dragon Dome." DD was a project for my "Imersive World Building" class at Drexel, one of my very last classes there. The class needs a bit of an introduction to fully understand the project. The idea behind the class is to make an animation for a planetarium. If you've ever been to a science museum, they usually have some sort of astronomy show where they project some stars on a dome. The bulk of these types of shows and others like them show the main action as happening in front of the audience who is probably seated. Things come from behind to appear in front. The problem with the majority of the work is that it does not fully utilize the full screen area, an entire hemisphere.

My goal going into the class was to create something visually stunning that the audience would have to stand in the center of the auditorium to fully appreciate. Things would happen all around the audience who might, at times, have to turn their entire body to catch something happening.

I decided I wanted to feature dragons flying around, making the audience feel like they are dwarfed by giant flying reptiles. 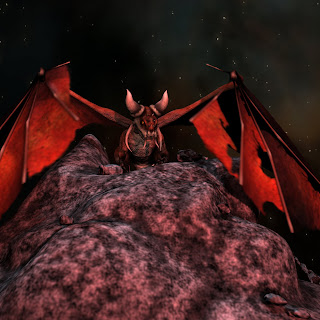 There are some concerns and challenges that are different from the usual flat screen challenges. First of all, the only off screen is below the horizon. Really, the camera needed to be treated not as a camera or picture frame (like most productions) it needed to be thought of a space that the audience inhabits. This means that there couldn't be a floor in our environment, the camera couldn't move, depth of field doesn't make sense, and sizing things was a challenge.

Another interesting challenge was lighting. I am used to lighting things for a single camera. The lights needed to make sense but also illuminate everything, quite challenging in a 360 degree field of view. We found if it was lit too brightly, the light would bounce around the dome and wash everything out.

For the final animation, I teamed up with two of my classmates, Greg Ruane and Dan Bodenstein. The animation started with the two dragons flying right above the audience from the front to the back of the planetarium with two more dragons circling high above. For about 40 seconds dragons weave through tall mountain peaks that dwarf the audience. The animation ends with on hero dragon landing on a rock directly in front of the audience and letting out a huge roar. Audio was completed in an extremely short amount of time by John Avarese, (who, you will remember, completed audio for Big Catch). Unfortunately there is no possible way for me to upload the animation for others to see as, I am assuming, no one that reads this blog has access to a planetarium. Hopefully, it won't be lost to time, at least one more class of Drexel grad students will get to see it, even if I never do again.

For the project, I modeled, sculpted, and textured the dragon. (see previous posts) I textured the mountains and modeled the hero mountain. For the sky, I used nuke to create a star field. I created a noise and tweaked it into tiny, different sized specs and glowed the heck out of them and then overlayed a colorful milky way-esque texture. It turned out looking pretty good even if the planetarium guy caught my fake star field the moment he saw it. For the hero dragon, I did a cloth sim for the wings using Maya's nCloth.

Dan was the smoke and render TD for the project, in addition to making procedural mountaintops. Rendering this thing was a whole job in itself. We had to take 5 camera's (top, front, back, left, and right) and stitch them together into something that looks like a squished dome. From there they needed to be cut up to the 8 projectors to be projected onto the dome. Dan also figured out a way of getting depth information for the camera that would allow for distance falloff effects, something that was apparently a struggle for the entire dome industry (according to our professor). Dan was hilariously pissed when he found out it was a thesis worthy project, months too late for him to do anything about it.

Greg rigged the dragon and animated him. mmmmm motion paths.

This is a "glommed" image that would get projected onto the dome. It doesn't make a whole lot of sense in its current state (on a 2d plane, your monitor).

What you see in the middle of the image would be directly above the audience and what is on the edges would be just above eye level (what you would see if you looked straight ahead. 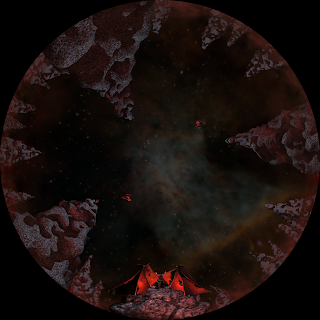