I spent most of the past week refining the body rig and working on the face rig.
i spent way more hours than I expected to finish up the rigging so I didn't have enough time to finish a pre-vis. I did however paint up a quick concept piece for the scene in which the carver holds up the carving. 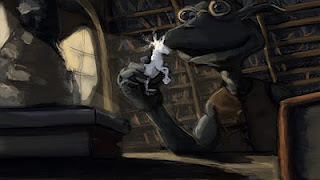 Additionally, I did some thinking about the story and have decided on some changes. Rather than walk away to look at a book, the carver will get a wooden case from the shelf that contains a collection of carvings of mythical creatures with one open slot. He'll reach down to put the new carving into the case and then realize it is gone and the story will continue as planned. There will be an additional ending scene where after retrieving the carving the character will place it into the open slot in the case, thus finishing his collection. Also, instead of carving the piece he may be painting it when the animation starts.
Posted by Nate Shaw at 2:44 PM