A fun side effect of being a new CG and VFX student is coming to the realization that NOTHING ON TV OR IN MOVIES IS REAL. I used to share an opinion with many people that digital vfx were making movies less good. I guess I was thinking of the Phantom Menace or something. Little did I know that very little on tv is not digitally altered in some way. Think you can always spot digital vfx? Watch this: Ugly Betty VFX Breakdown Now its not perfect but if someone hadn't mentioned that this was all digitally recreated then I probably would never have known. Another great vfx breakdown, this time for Black Swan

So that is compositing. I just finished my first (and last, I guess) class in the subject. The class was entitled: Matte Painting. Unfortunately there was no actual matte painting going on in the class, not really. It was really an advanced compositing class. This term the professor added an extra element to the project. We had to do the project in stereo. (thats 3D for the general public, you know, like the movies where you wear the glasses, for example Step Up 3D).

We had to shoot our own footage for the project. Having never touched a video or film camera before this was quite a challenge for me. On top of that was the stereo requirement, so I had to shoot the footage out of two cameras at once. I really screwed up the footage part, which caused major problems down the line that never really got resolved. Basically the stereo portion of the project is unwatchable. (even if you happen to have a 3d monitor, projector, or tv. or more likely but still probably not, have anaglyph glasses sitting next to your computer like me)

I learned a lot in the process so the project wasn't a failure. You can watch the mono version of the project on vimeo. Click the image to be sent to the video page: 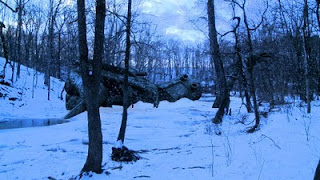 I'm going to do a quick breakdown of the plate eventually.
Posted by Nate Shaw at 2:43 PM